Back in June, I gave a talk on Preventing Massive View Controllers and described an app architecture with a one-way data flow in Swift. At the time, the architecture didn’t have an accompanying blog post or even a name. Now, it has both. I’d like to introduce Ziggurat: a layered, testable architecture pattern incorporating immutable view models and one-way data flow. 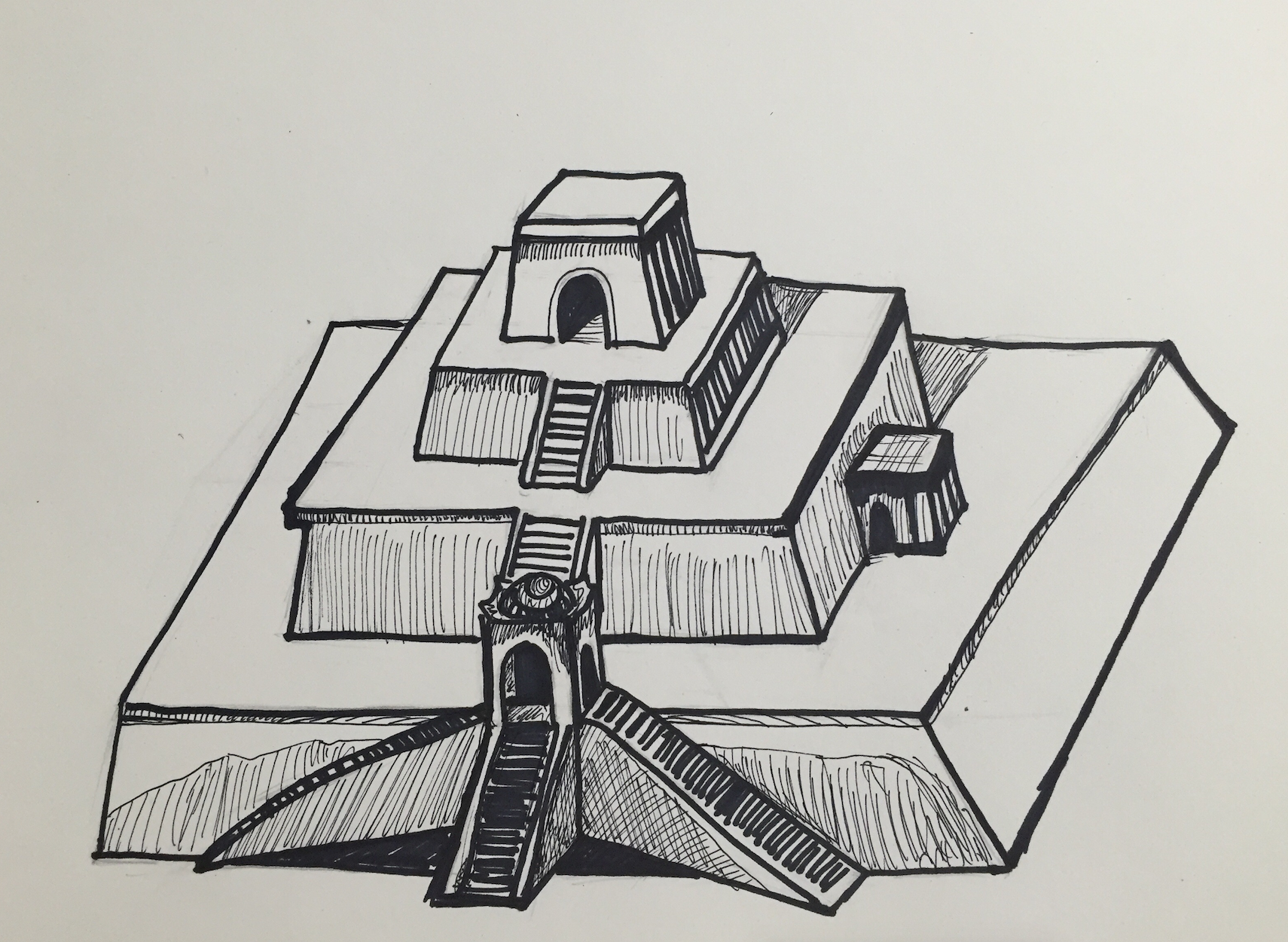 This architecture is dubbed “Ziggurat” after the stepped pyramid. Like the steps of this pyramid, data complexity scales down as data flows in a single direction through the layers of the app. This one-way, immutable flow of data reduces cognitive load and results in smaller classes. Compared with Ziggurat, a typical Model-View-Controller architecture provides less guidance, and data and state may be mutated from a variety of places, including the view controllers.

Ziggurat remixes concepts from a variety of talks and articles, which I’ll list in the Further Reading / Watching section. (Spoiler: it’s inspired directly by early talks on Facebook’s React Native and is similar to Flux). Of the alternative architectures referenced herein, any would be a favorable choice versus Model-View-Controller.

I’ll present Ziggurat, describe its background, contrast its tradeoffs, define its components, and show it in action with a sample app.

Ziggurat is an alternative pattern to Model-View-Controller (MVC). MVC is a basic way to divide responsibility in an app, but it inadequately separates roles and responsibilities. These are some common problems experienced in MVC apps:

Hard to Test Code with Too Much Responsibility

In practice, MVC’s lack of separation leads to apps without design clarity that become hard to test and debug. Engineers should not need to reverse engineer an app’s design and data model in order to work effectively in a codebase.

I’ll go over the basics of the Ziggurat pattern, but for a more detailed description see the resources listed below: 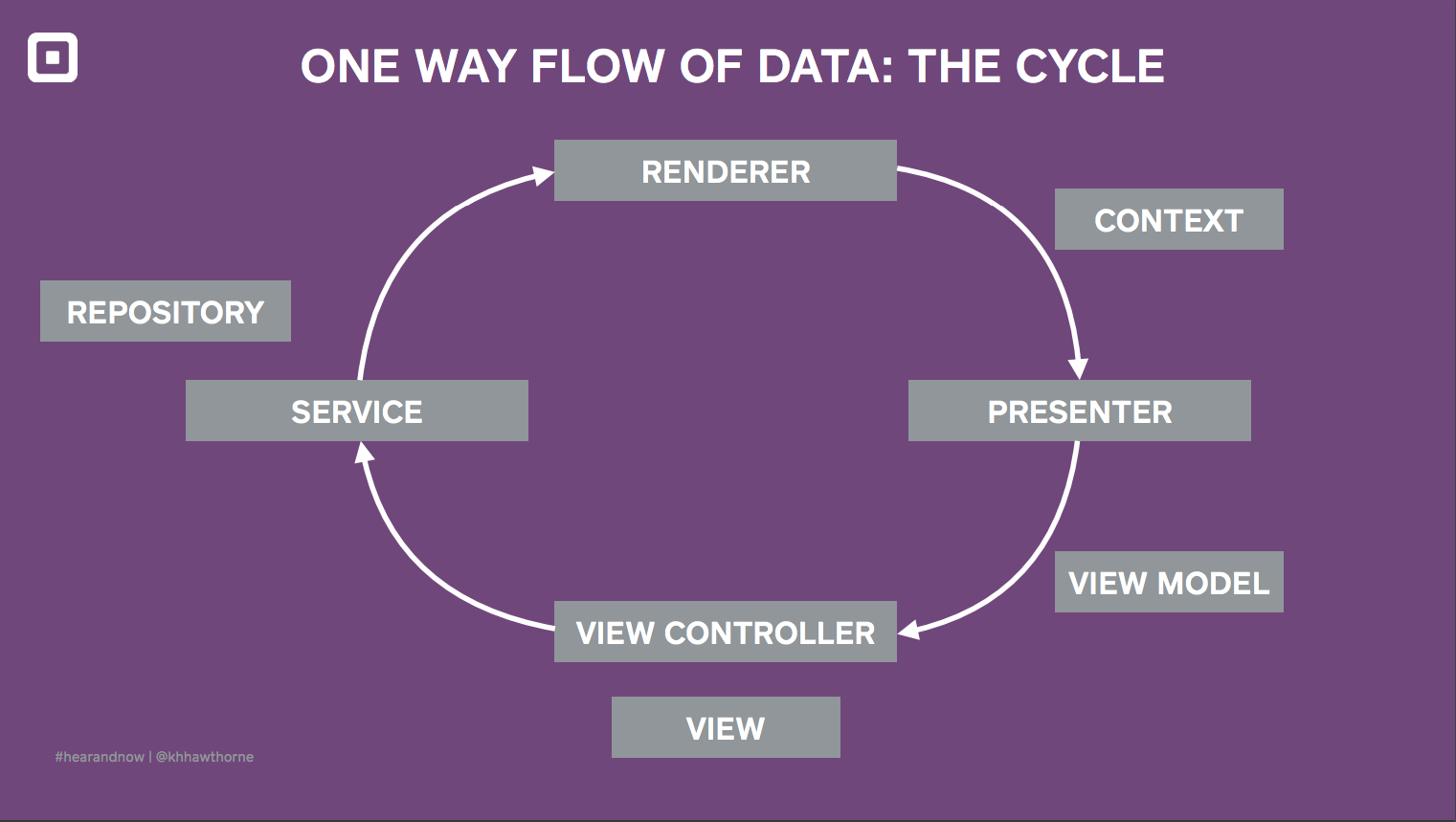 Ziggurat’s one-way data flow is visualized above (and demonstrated in action here):

Ziggurat made life better in several ways, and enabled our small team of developers with a mix of iOS experience (ranging from none to several years worth) to hit an ambitious deadline.

For one thing, it clearly defines layers and roles in the app by providing guidelines and guardrails for engineers who are new to the codebase. Ramp-up time is short for new engineers, since the role of each component is well-defined and fits a well-defined mental model. Secondly, the Ziggurat pattern makes it easy to add tests. For example, we use the view model layer to compare structs as expected output. This wouldn’t be feasible in MVC.

One-way data flow prevented MVC spaghetti and shrank view controllers drastically. Immutable types, smaller objects (preferably structs), and more layers reduce mental overhead. It’s also easier now to run apps in a “headless” mode since the view layer is devoid of business logic; all business logic is testable without a view layer; view state can be recreated with point-in-time view model snapshots. And finally, we found that the app was portable. Thanks to layers and dependency injection, it was straightforward to transition from an app to being an applet contained in another app.

Ziggurat made a few things more difficult, like animations. We recommend using Ziggurat in apps which use animation sparingly. View Controller animations could be disrupted by an incomingupdate() call, which could cause flicker unless carefully managed. With Flux, this issue is solved by using it with React Native.

Additionally, some boilerplate code resulted from pushing data through additional layers, although it provided additional compile-time checks. There’s also a potential bottleneck with single data update pipeline. Unlike React, properties are not key-value observed; instead, updates come in piecemeal as view model structs. Some optimizations may be needed, such as discarding extraneous render calls or pruning the view model with diffing.

Dependency injection requires careful design. Our initial approach led to a large object graph. We had circular dependencies, which led to refactoring.

New projects offer an opportunity to try out new ideas. MVC has a number of clear weaknesses and has gained ignominy. Meanwhile, a number of talks on subjects such as Flux, React Native, and using value types more extensively with Swift have gained momentum.

We built out a complete Swift app with an architecture that remixes these ideas. We’re pleased with the results of using one-way data flow, testability, dependency injection, lightweight view controllers, and value-typed view models.

There are tradeoffs of Ziggurat, but it’s served us well so far. I hope you’ll consider adopting some (or maybe all!) of the ideas here in your next project, especially before settling on an MVC architecture.

I watched early videos related to React, and they were a direct inspiration for Ziggurat. Flux and React Native use similar concepts and are implemented in JavaScript.

Flux is a robust, action-centric pattern that pairs well with React Native. Ziggurat is easily used in an app with minimal animations, but does not provide a solution for complex animations that could be interrupted by unpredictable re-renders. (Flux has this issue too, which React Native addresses.)

We hope you find the Ziggurat pattern helpful, and/or discover one of many better alternatives to MVC covered in the articles below:

Thanks to Ruby Chen for the illustration. Alan Fineberg - Profile Debt: The First 5000 Years made a big impression on me so I eagerly scooped up The Utopia of Rules by David Graeber. It…medium.com