Our QA team has been testing Square POS on Android Q, and recently assigned the following ticket to me:

We automatically upload memory leaks to Bugsnag in our debug builds, so I took a look. Sure enough, the leaks on Q (Android 10) were off the charts: 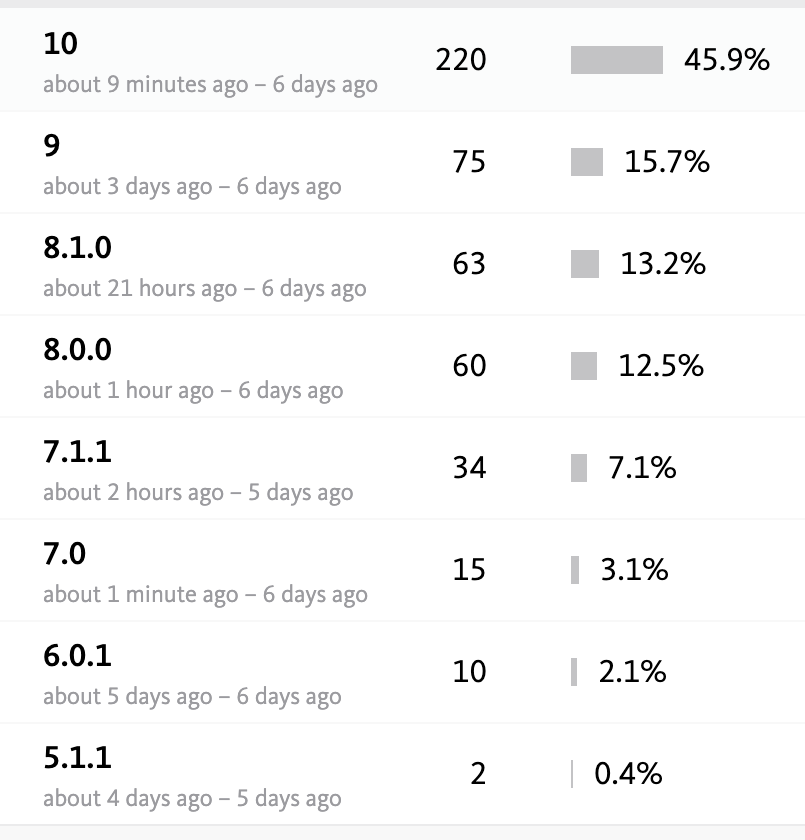 I then looked at the top Q leaks, and their leak traces were all a variant of this:

That's unusual: DeterminateProgressView is attached, yet it's mContext field is a destroyed activity. How could that be? On all other Android releases, all views in the view hierarchy become detached when the activity is destroyed. Did that change?

Note: you might also notice that the trace has "Leaking: NO (View attached)" for DeterminateProgressView. LeakCanary 2 has heuristics built in, it tries to guess if an instance is leaking or not by determining its lifecycle state. An attached view is still in use, so it's not leaking. These heuristics help LeakCanary highlight the likely causes of the leak, see the "~~~~~~~~" under mContext.

I was able to reproduce this leak, so I started debugging and determined that this view indeed belonged to the destroyed activity. Why was it still in an attached state?

It's always easier to blame the Android Framework, so I decided to learn more about the AccessibilityNodeIdManager at the top of the LeakTrace and read its sources. Unfortunately, the Android Q sources aren't available yet, so I got them the fun way:

I looked into the View class to understand when AccessibilityNodeIdManager is called:

Assuming there was a problem with how the view attached / detached, this leak now made sense: the view registered but not unregistered because it wasn't detached.

I added log statements to the onAttachedToWindow() and onDetachedFromWindow() callbacks of both the leaking view (DeterminateProgressView) and it's parent (JailView). Here was the output:

Wait, what 🤯 ? Why is attached called after detached??

When I hit the breakpoint, I went up the stack to look at the local variables in ViewGroup.dispatchAttachedToWindow() for the parent of JailView (a FrameLayout). Here's what I saw:

Notice how child is set to JailView, but children is an array of one element containing only OrderEntryView. Based on the code above, how could child be different from children[0] 🤯 ?

I added a breakpoint to JailView.onDetachedFromWindow(), and all of a sudden it all made sense.

As you can see from the arrows, JailView.onAttachedToWindow() ends up calling ViewGroup.removeAllViews() from its parent, and then inserting a new view in its place, which indeed updates mChildren: 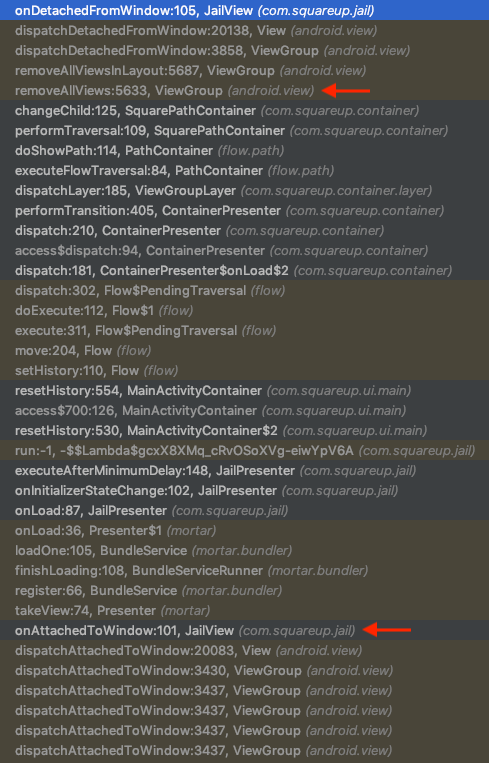 JailView is a loading screen that keeps users in "jail" until the app is ready for them. When JailView gets attached, it wires up its presenter which starts loading data if necessary. When the data is ready, the presenter tells the app to navigate to a new view. If the data is already loaded by the time the presenter checks, then it immediately moves to the next view. Note that this is synchronous – we're still attaching JailView, and it's decided to go away while we're doing that.

When JailView receives ViewGroup.dispatchDetachedFromWindow(), it dispatches the detach call to its children. Then the call stack pops, and we continue on attaching JailView – which means ViewGroup.dispatchAttachedToWindow() continues on to attach JailView's children. JailView's children, which have already received a detach call in the middle of all this, now receive their attach call out of order, and end up being stored in AccessibilityNodeIdManager forever. Leak!

If you want to try this for yourself, I wrote a simple activity that reproduces the behavior and the leak:

Is this an Android bug? Hard to say, it's quite unexpected to have a view remove itself from its parent from within its onAttachedToWindow() parent. That being said, a lot of apps still use an MVP architecture and rely on onAttachedToWindow() to wire up presenters. And don't forget Murphy's law: Anything that can go wrong will go wrong.

I've been informed that AccessibilityNodeIdManager will use weak references in a future Android Q release and the leaks from that edge case will disappear 🎉. As for Square POS, we have deprecated our MVP architecture and are actively migrating to Workflow, which does not rely on onAttachedToWindow().