This article is the first installment in a four part series, which will include tutorials designed to demonstrate how to easily make the most of the package. You can also find these tutorials on the official website:

PySurvival is an open source python package for Survival Analysis modeling — the modeling concept used to analyze or predict when an event is likely to happen. It is built on top the most commonly used machine learning packages: NumPy, SciPy, and PyTorch.

PySurvival provides a very easy way to navigate between theoretical knowledge on Survival Analysis and detailed tutorials on how to conduct a full analysis, as well as build and use a model. The package contains:

If you have already installed a working version of gcc, the easiest way to install Pysurvival is using pip.

The complete installation steps can be found here.

What is Survival Analysis ?

Survival analysis is used to analyze or predict when an event is likely to happen. It originated in medical research, but its use has greatly expanded to many different fields. For instance:

The real strength of Survival Analysis is its capacity to handle situations when the event has not happened yet. To illustrate this, let’s take the example of two customers of a company and follow their active/churn status between January 2018 and April 2018: 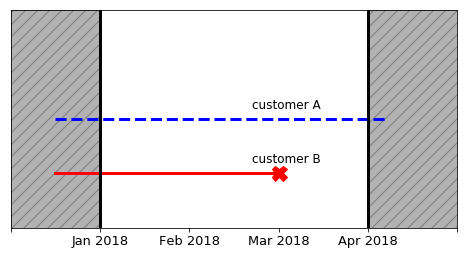 Here, we have an explicit depiction of the event for customer B. However, we have no information about customer A, except that he/she hasn’t churned yet at the end of the January 2018 to April 2018 time window. This situation is called censoring.

One might be tempted to use a regression model to predict when events are likely to happen. But to do that, one would need to disregard censored samples, which would result in a loss of important information. Fortunately, Survival models are able to take censoring into account and incorporate the uncertainty, so that instead of predicting the time of an event, we predict the probability that an event happens at a particular time. 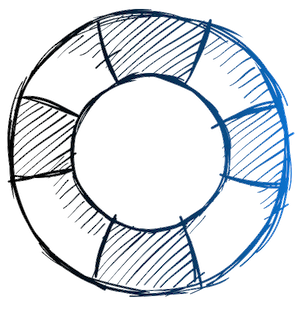