Identifying and Scaling a Language Market

Using data to understand where to improve localization

In 2018, while shadowing Customer Success calls, Square’s internationalization and localization PM noticed that many Square merchants were calling into US Spanish support. Revisiting the product experience in Spanish, she found the user experience to be disjointed and broken. Many public web pages were not localized and marketing materials targeting Spanish-speaking sellers were sparse. Square was not serving these sellers as well as it could have. In order to better understand the scale of this shortcoming, she tasked Square’s product analytics team to estimate the number of Spanish-speaking sellers using Square.

From Observation to Insight - Defining who US ES merchants Are

To identify Spanish-speaking sellers, we analyzed merchants’ language usage across Square’s platform, including:

If a merchant ever used Spanish in any of these product touchpoints, we counted them as Spanish-speaking sellers.

Building a Product Roadmap from Insights

These insights guided the team to formulate concrete engineering tasks to work on. Short term tasks involved clarifying that sellers could provide their Taxpayer Identification Number and making these changes in the English onboarding flow as well as the Spanish onboarding flow as we found many ES sellers were getting the help of an English-speaking relative or friend to get started, and working with Identity Verification vendors to improve Square’s activation rate.

With these changes, the team was able to improve Square’s Spanish-speaking sellers’ activation rate from ~75% to a whopping ~90%. 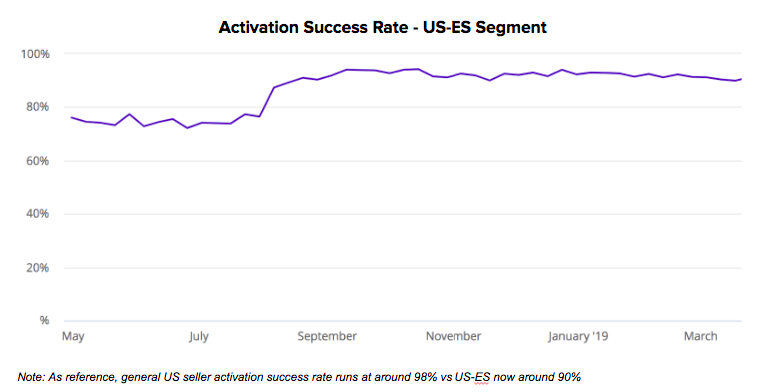 After the initial activation success for Spanish-speaking sellers, we wanted to improve our messaging and better understand who our merchants are. We found that the Lifetime Value (LTV) of US ES merchants was almost 50% higher than that of US EN merchants and are much more likely to only use their device in Spanish. This led us to the hypothesis that a subset of US ES merchants had employees who preferred to speak Spanish, but the owner didn’t speak Spanish themselves.

We found these sellers have higher LTV as compared to non Spanish speaking merchants and the majority of these sellers use Spanish on their device only and many of them either had businesses conducive to having more employees.

Our Product Marketing Manager used this finding to further tailor our messaging to these merchants.

Another way data was key in informing decision making was through targeting. Using US census data as a proxy for the Spanish-speaking population, we identified pockets of population with many Spanish speakers but low Square penetration.

To visualize census data on the Core-based statistical area, CBSA level, you can use the folium package in Python. The following shows a code snippet of how to generate a map using folium. cbsa is the path of where the cbsa geojson file is located and census is a data frame of census data by CBSA. You can find the detailed code, as well as the geojson and census files on my github here.

Visualizing the data shows a high concentration of Spanish-speaking sellers are likely to reside in Florida and Southern California regions. Some of the more surprising CBSAs include Chicago, Philadelphia, and Boston. The map below shows Spanish-speaking population by CBSA based on the census data. 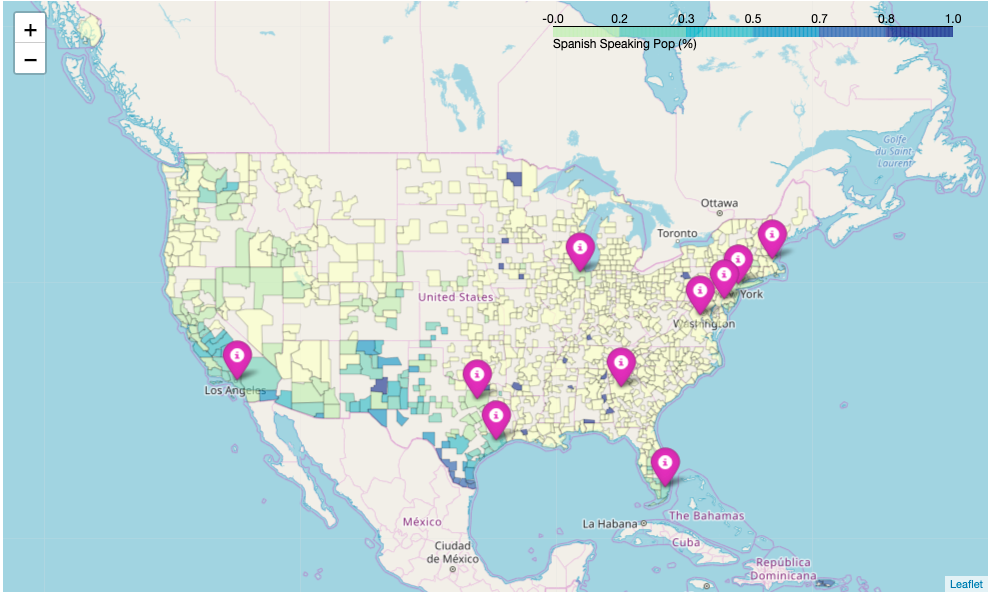 To see how to create folium markers for the top 10 CBSAS with the highest population and Spanish Speaking population pct see my github here.

Comparing this data with our findings convinced us to better localize our marketing messaging. We are currently testing a mix of different localized messages to better appeal to Spanish-speaking merchants in these areas.

For the Spanish-speaking sellers experience at Square, this project exposed many gaps in the localization experience and challenged our understanding of one-size-fits-all product and marketing solutions. Our Customer Success team has made further strides to include device language as an additional identifier to offer Spanish-speaking support to Square sellers.

While still more remains to be done to improve the experience of Spanish Speaking sellers at Square, we believe that everyone should be able to participate and thrive in the economy and are dedicated to closing that gap.