A couple weeks ago, I had the opportunity to hang out at Square’s New York City office with 16 other talented women engineers for Square College Code Camp, a five-day immersive program for women studying engineering that focuses on developing technical and leadership skills.

While the week was full of workshops on web and mobile app development, product design processes, and discussions with insightful Square developers, I found that the moments in which I had learned the most were those I spent getting to know the people around me. Here’s a collection of some of my favorite moments from the program.

Scattered throughout the week were technical workshops on Ruby, Rails, design, and iOS and web development. Each workshop was an introduction to its subject, but went in-depth enough for us to have learned something new that we could use in our passion project later in the week.

Laura taught us about “metaprogramming” with Ruby’s method called define_method; Alyssa showed us MVC structures and how Rails apps work like Shake Shack — that is, with clients and servers; Nick taught us about the extensive research and constant iterations involved in the processes of making great designs; Ghassan helped many of us create our very first iPhone apps; and Marie taught us about the magic that happens behind the scenes on websites, otherwise known as back-end web development. 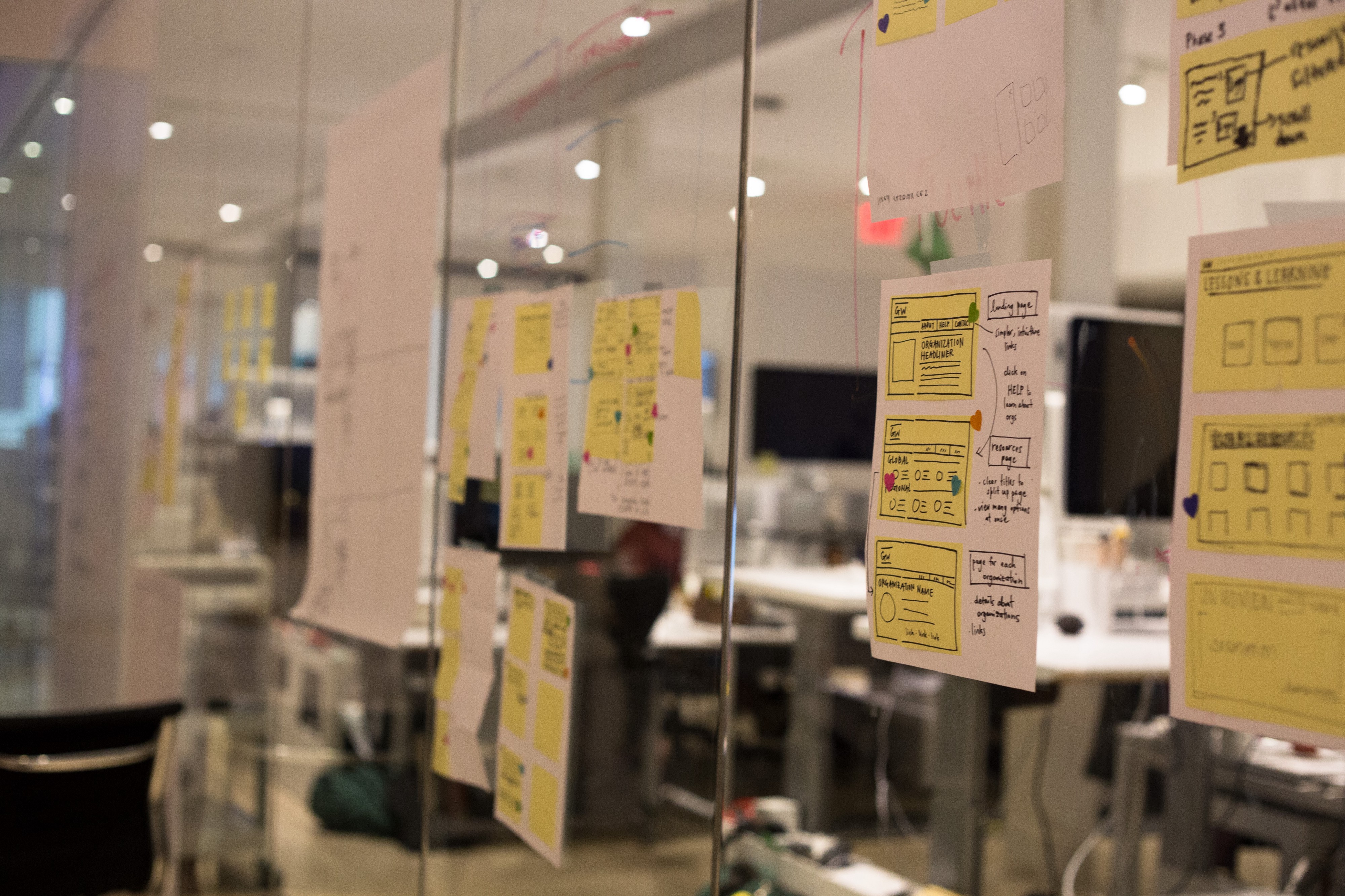 Hanging up the wireframes we sketched (that one’s mine!) and placing heart stickers on what we like about others’ designs. Photo by Ashley Chen.

To me, mentorship happens constantly; it happens every time a person tells me about themselves, inspires me, or motivates me. When I asked Nick, a Square designer, about how to justify my design choices for our passion project, he spoke to me about how good design communicates ideas. His passion for and comfortability with the subject encouraged me to be more confident about my own ideas. In those few minutes that we talked, he was my mentor. 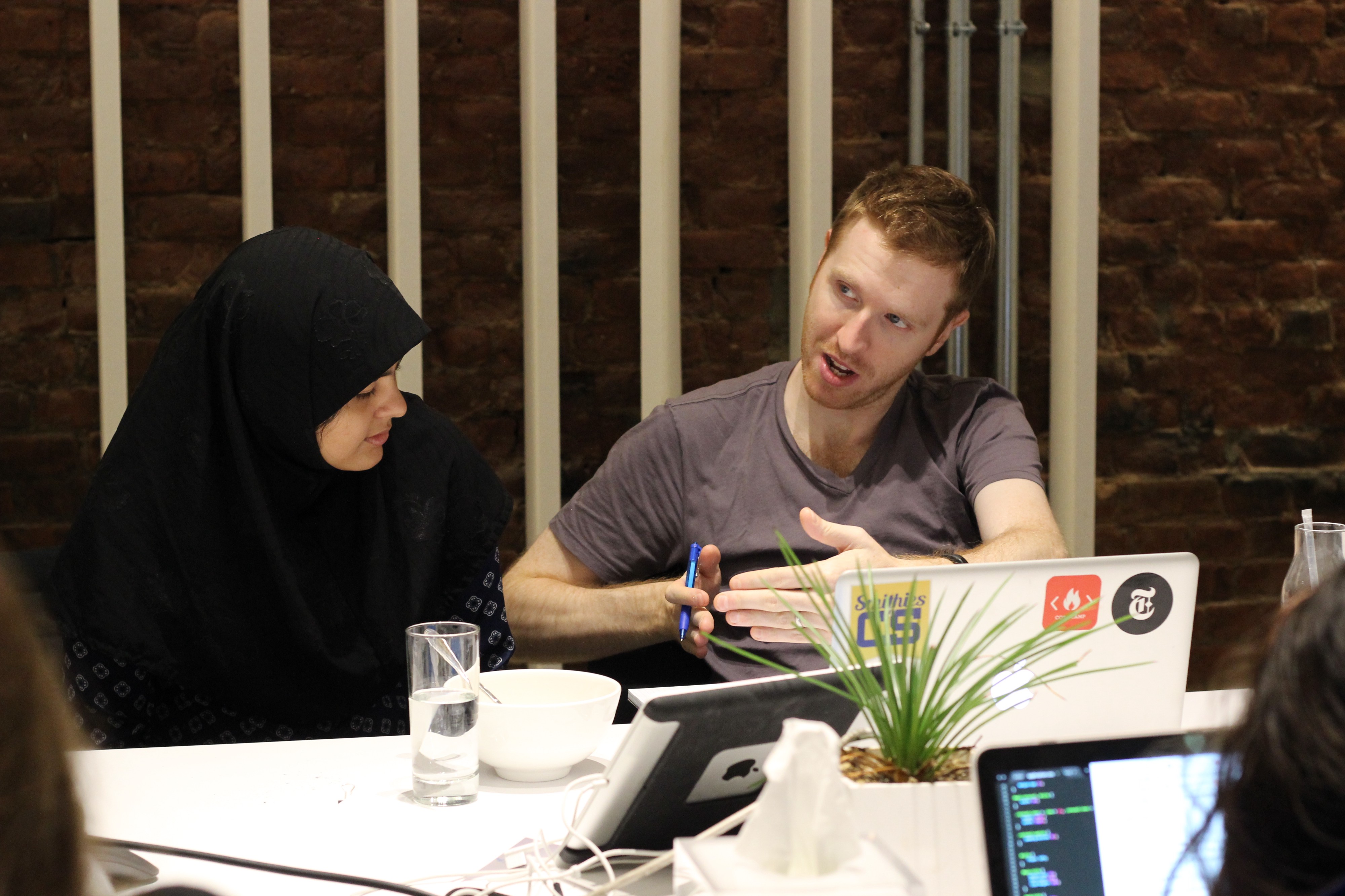 Alyssa, a software engineer at Square, was assigned to be my mentor over lunch one day, and she told me about how she started Square’s WomEng group — a community of women engineers at Square that began as a small group but has since expanded to become a network outside of Square. Alyssa wasn’t my mentor because Gloria paired her up with me as part of the program; Alyssa was my mentor because she reminded me of my aspirations to create a similar group at my school, which previously felt a little like a pipe dream, and inspired me to act on the changes I want to see in the world.

I feel so lucky to have spoken with so many talented people at Square that week, as I got more mentorship than a girl could have wished for.

The goal of our hackathon was to work with the Global Women’s Institute — a nonprofit dedicated to ending violence against women and girls — to propose new features for their website’s media library. When it was time to start working on our passion projects, my teammates and I gathered around a table and talked about our skills to figure out what we could build. Most of us already had experience with HTML and CSS, so we decided to recreate the website with increased functionality, using the knowledge on design principles and Ruby on Rails we just acquired. 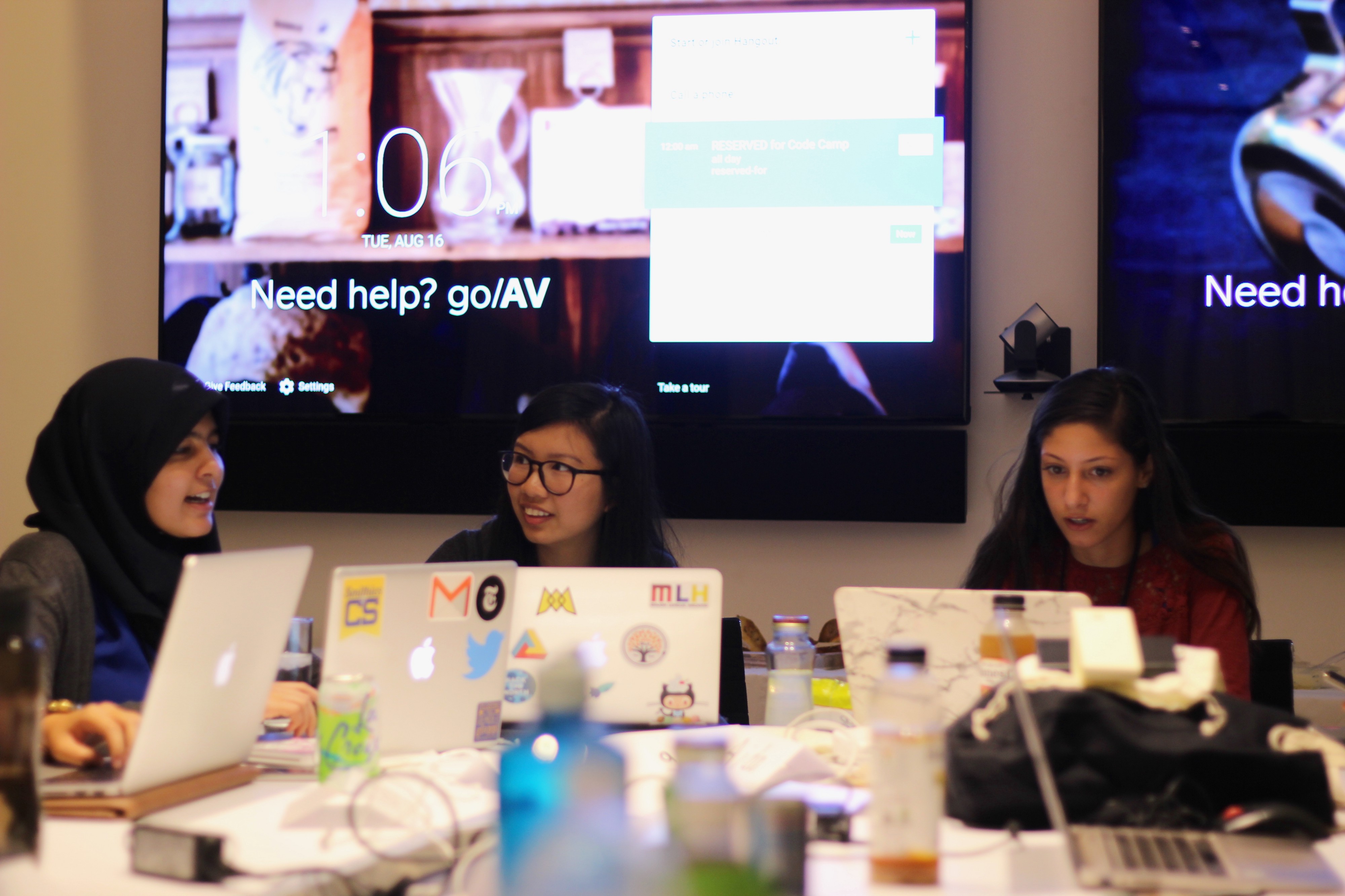 Shortly after making this decision, my teammate, Aida, pitched an idea about using Bootstrap in our web app, except it wasn’t just *a pitch, she said, “hey, we could also incorporate Bootstrap — or, I mean, *I couldn’t, but one of you probably could.” I distinctly remember being in the middle of sketching a wireframe that included all the new features for the webpage we just discussed, when I heard this statement and was immediately taken aback. I was in a room full of brilliant, talented women and one of them had just inadvertently insulted herself.

I felt awful, hearing such a talented individual put herself down so blatantly, so I had to confront her on it. Before Aida could continue, I gently interrupted and said, “hold on, don’t say that, you could totally do it, too!” What followed felt like a flood of good vibes, as my other teammates enthusiastically agreed and chimed in to reassure their teammate: “you can do it!” and “yeah, we can help you!” and more. In that moment I felt so fortunate to be part of such a wonderfully supportive community of women. 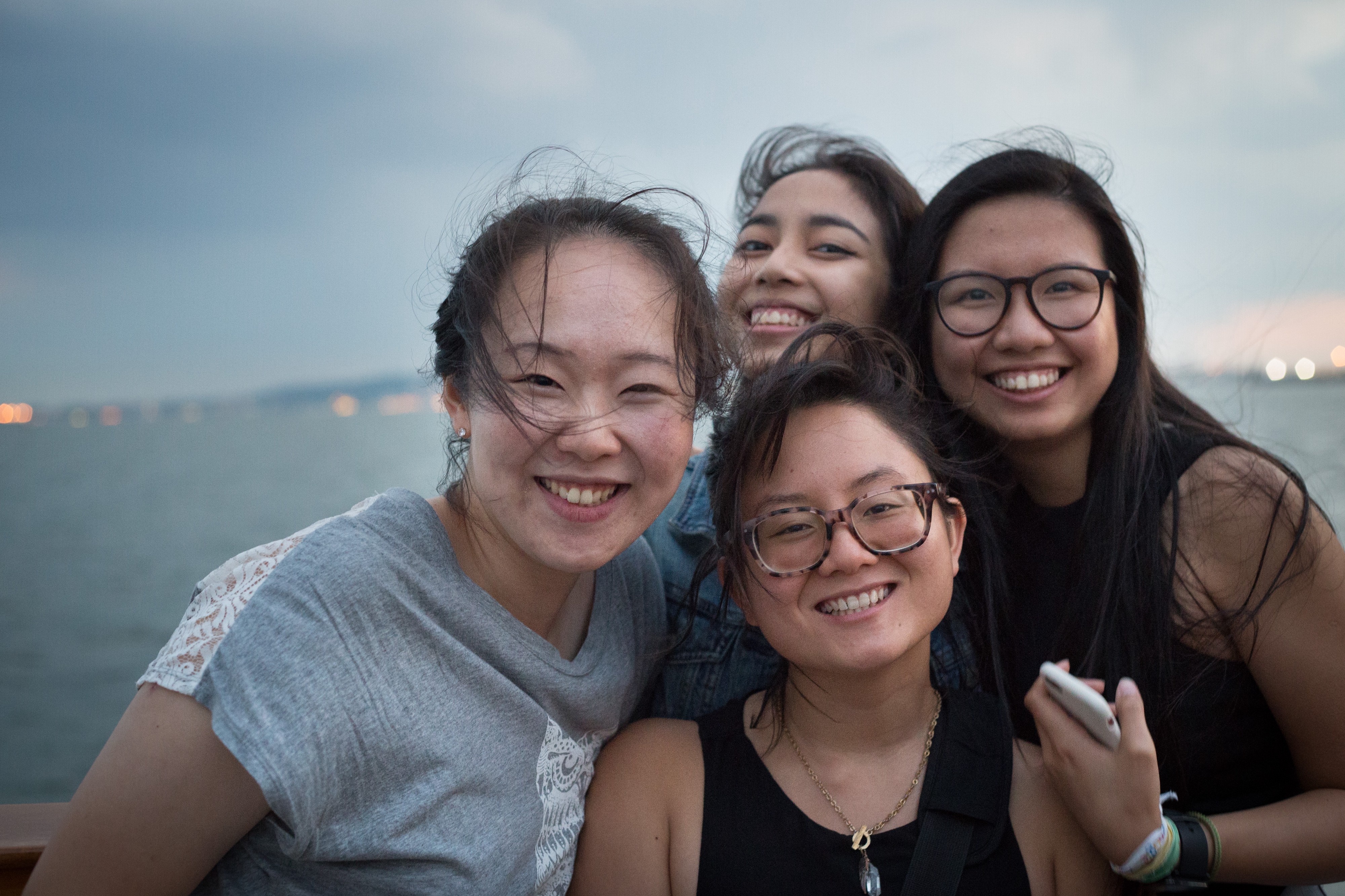 Enjoying our last night together on a scenic boat cruise along the Hudson River! Photo by Ashley Chen.

Later on in the week, Gloria, our wonderful camp leader and personal jazz tune recommender, also gave a workshop on impostor syndrome, during which she asked us to reflect on our own experiences with impostor syndrome and how we plan on combatting it in the future. Gloria also inspired us all to realize our accomplishments, reminding us that of the hundreds of applicants to Code Camp VII, someone (many people, actually) really believed in us. We discussed several other ways to overcome impostor syndrome, but my favorite strategy involved learning to watch your language; if there’s one thing that I learned from the conversation with my teammates from earlier, it’s that we’re stronger when the words we say to ourselves are ones of encouragement, not doubt.

The five days I spent at Code Camp flew by so quickly that I didn’t even realize what I had learned until I sat down and thought about it. 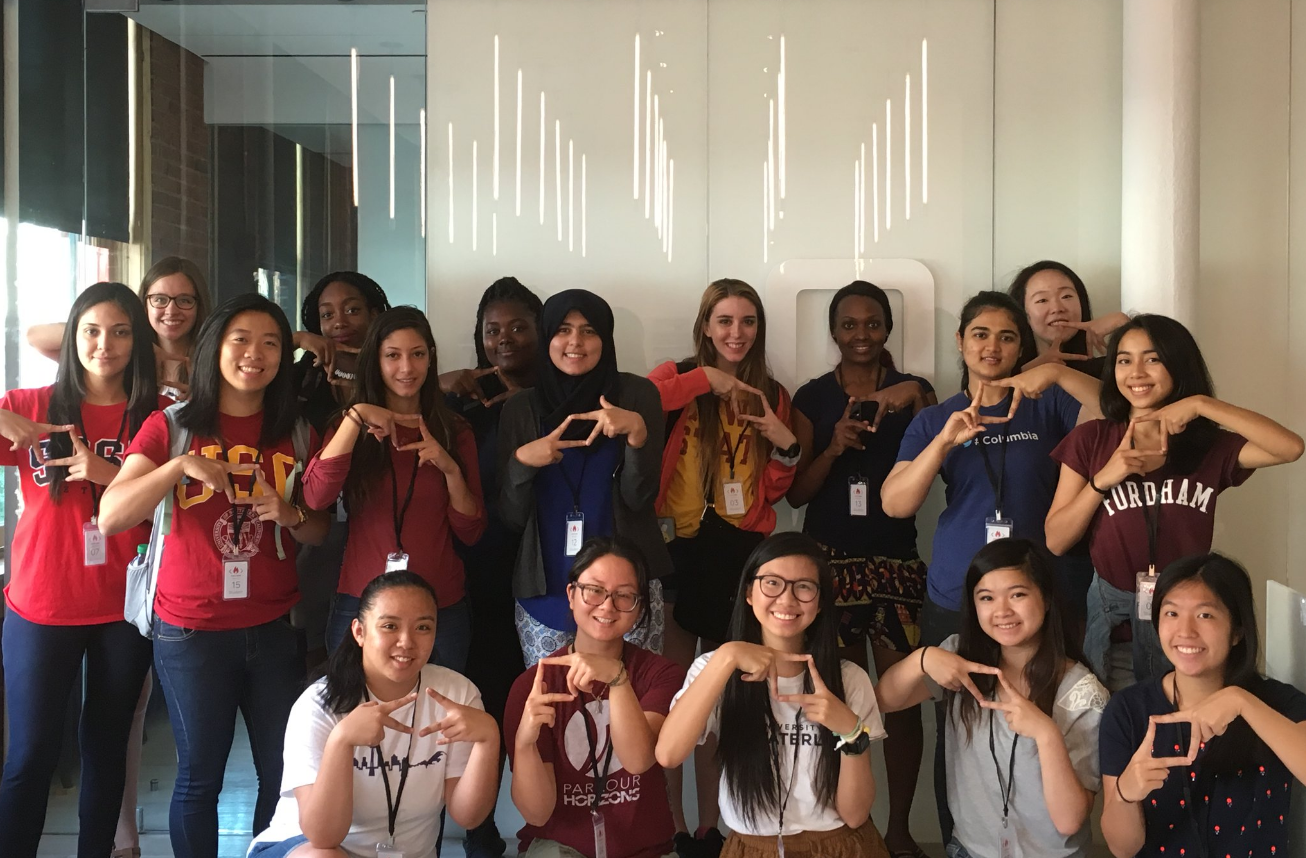 Not only did I make 16 new best friends from all over the States and Canada, but I also learned a handful of life lessons as well. Here’s the list of them:

I’m not exactly sure what’s in store for me or where I’ll end up in a year or two, but I know one thing’s for certain: I plan on greeting every opportunity with open arms and with the same fearlessness I had in that conference room on Broadway with my friends and mentors. I’ll be okay without having everything squared away.